The trail is not for the feint of heart. It is not difficult, indeed it is quite easy, mostly boardwalks through the woods. The daunting part is in the sheer evidence of bear activity. While I have often seen bear sign on trails in Alaska, it has never been this intense. Crushed grass and brush everywhere, bear prints, bear scat, fish carcasses, even a couple bear dens along the trail. This is not just a high bear use area, the area is thick with bears. 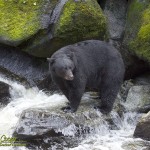 There is good reason for this, for there are also fish. The largest pink run in Southeast Alaska runs up the Anan river to spawn on the shallow gravel bars just above the falls. That is the destination of the trail, the waterfalls found a half mile inland, that is where the bears await the fish.

While we have not encountered a bear actually on the trail, this is a place to take full precautions. Bear spray is highly recommended, we carry two cans along when entering bear territory like this. This is a place to enter only with care. If you are unsure as to whether you want to venture here, you might consider joining one of the tours that come here from Wrangell. The guides will be equipped and experienced in accessing the site safely.

We walked as a group, no stringing out along the trail here. The conversation deliberately loud, to let the bears know we are coming. Dan led the way, one can of bear spray at the ready, I brought up the rear, bear spray at my belt and a camera at hand.

The bears were there. 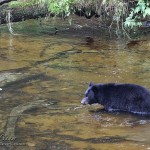 A large black bear was fishing at the falls. Directly across from the Forest Service viewing platform, he waited on a rock above the stream. His success rate was not very good, it took half a dozen tries to get each fish. The bear would catch a salmon every ten or fifteen minutes, retreating into the tumbled boulders to eat his prize.

Dan saw a mother grizzly with cubs upstream. But they were gone when I got there to look.

Another black bear worked the stream above the falls. The stream was full of fish, thousands of pink salmon hovered over the gravel bars spawning. This bear was notably more efficient in getting his fish. He was snorkeling, simply putting his head down while he trundled through the creek, grabbing the exhausted fish too slow to avoid his teeth. It took only moments to get each fish, which he took into the brush to eat. In a matter of ten or fifteen minutes I watched this bear grab and eat four large fish.

We watched bears for a couple hours from the safety of the enclosure and platforms. I took dozens of photos, of bears so close I hardly needed the telephoto lens. Eventually it was time to leave, with only the little matter of that trail back through the woods, among the bears.