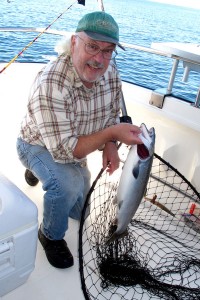 September is fairly late in the season for Southeast Alaska, but that does not mean that the month is a poor choice for cruising and fishing. The late summer weather is often quite nice. The fishing? That can be pretty good as well.

Into September the king salmon have long ago spawn, and even the pinks have pretty much headed up the creek.. The silvers (also called coho) are still spawning, making the first weeks of September an angler’s thrill. The silvers are big too, having spent the summer fattening on baitfish in the open sounds and channels. Fifteen pound fish can be common if you pick the right place.

With the pink salmon runs waning, the ratio of fish caught can be favorable. Earlier in the summer it is typical to catch two or more pinks for every silver caught, late in the season this can switch… You might catch one or two pinks while limiting out on the more desirable silvers. As the fish are headed for the spawning grounds you need to fish further inside, closer to the rivers and streams.

This summer we hit silvers nicely in the first week of September, two excellent days of fishing around Ketchikan. One morning of trolling from Tatoosh Island to Clover Pass saw us land fifteen silvers and two pink salmon. All big pretty fish that dressed out well, filling the freezers for the trip south. We were not alone, we counted seventy boats out on a pretty Saturday morning, from skiffs to cruisers. The boats around us were mostly locals, folks that obviously knew where and when to catch the best fish.

An electrical engineer living and working on Mauna Kea, Hawai'i. Webmaster for the NordicQuest.com website. Sometimes the first mate/deckhand/launch driver/anchor detail/cook/dishwasher and mechanic aboard the Nordic Quest.
View all posts by Andrew Cooper →
This entry was posted in Fishing, Fishing Holes and tagged coho, fishing, Ketchikan, late season, September, silvers. Bookmark the permalink.