The Wreck of the SS Ohio

In 1909 the Alaskan Steamship Company steamer SS Ohio struck an uncharted rock in Finlayson Channel. Traveling north, the steamer was serving the Seattle to Nome route as she had for the past eleven seasons. Originally constructed in 1872 for the transatlantic trade the ship was one of the largest iron ships to had been built in the Unites States at the time of construction. The SS Ohio worked the Liverpool to Philadelphia route for 25 years. The Alaskan gold rush, and the demand for ships on the Pacific coast had been opportunity for the aging ship to be sold at a premium. 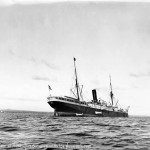 The SS Ohio anchored off Nome, Alaska in 1907, photo from the University of Washington digital collection

Knowing that there was little he or his crew could do, the captain beached the sinking ship in the nearby Carter Bay, an action that saved the lives of all but four of the 214 passengers and crew.

Never fully salvaged, the ship still lies on the sandy beach at the top of the bay. This is a substantial wreck, the ship was 343 feet long and displaced 3,104 tons, one of the most substantial wrecks to occur along the Inside Passage. A rock on the far side of Finlayson Channel at the entry to the Hiekish Narrows now bears the name Ohio Rock on the official Canadian charts.

The wreck is best seen at low tide, laying in shallow water at the edge of the beach. You do need a decently low tide to see much, we stopped by with a +6 low tide and saw only a small portion of the bow above water. As Carter Bay is along the main Inside Passage cruising route it may be worth a peek if you are passing by on a good low tide.

An electrical engineer living and working on Mauna Kea, Hawai'i. Webmaster for the NordicQuest.com website. Sometimes the first mate/deckhand/launch driver/anchor detail/cook/dishwasher and mechanic aboard the Nordic Quest.
View all posts by Andrew Cooper →
This entry was posted in Alaskan History, BC History and tagged British Columbia, Finlayson, Ohio, wreck. Bookmark the permalink.