A Guide to the Fishing Boats of SE Alaska

Posted on September 3, 2016 by Andrew Cooper

When touring and fishing the inland passageways of southeast Alaska you will pass a wide array of other craft on the water. Your desire to catch fish might be for the sport of it or simply the desire to fill a cooler for the flight home. It is worth remembering that there are others who wrest a living catching the abundant salmon of these waters.

Commercial fishing is highly regulated in Alaska. An active fisheries program monitors catch reports and surveys, using the data to set limits and to open and close areas to the fishing fleet on a daily basis through the season. The boats and crews live life from opening to opening, moving with the fish through the passages of SE Alaska, ready to set their nets where and when the opening starts.

Summer cruising in these waters one will come across the fishing fleet. A swarm of boats working a particular area. At first glance it may be confusing to an outsider. If you are observant you will soon see that there are several distinct styles of fishing in use. The commercial fishermen use a number of different techniques to catch fish, each method associated with a very different boat.

As you steer around each of these boats there are a few things to be aware of. You do not want to be responsible for damaging gear by driving through someone’s net. The fishermen of Alaska lead lives that are filled with enough risk without losing time and gear to an unobservant cruiser. Along with a description of each of the major types of fishing boats we have included some precautions when you are in the area.

The largest fishing boat typically operating in SE Alaska is the seiner. These boats are quickly identified through several features that are visible from some distance. A tall wheelhouse sits well forward from a large working deck, the wheelhouse is usually two decks high or more. The seiner typically has a large boom crane over the rear deck for use in working the net. Hanging from this boom will be a huge block. If not in the water the net will be on the back deck in a large pile. 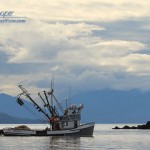 A seiner awaits the start of an opening, photo by Andrew Cooper

Along with the net there will be a powerboat net tender or skiff. These little, overpowered and solidly built boats are impressive… Typically quite small but boasting powerful engines and propellers, the skiffs have the power to tow the heavy net through the water or hold it against the shoreline during the set. When not in use the skiff may be lifted onto the back deck of the seiner atop the net.

During the set, when the net is deployed, the seiner will be at one end of the net with the power skiff tending the net or holding it in position. One end of the net is usually kept near shore with the main boat at the other end of the net offshore. To harvest the fish the skiff will pull the net closed, back to the main vessel. This is not always the case, the net can be set across a channel with both vessels towing the net along. We have encountered a seiner operating in the middle of Gastineau channel, just south of the main Juneau harbor, quite a surprise in this busy waterway. We anticipated and steered around the net well ahead of time, then watched as a fast Coast Guard patrol boat nearly ran the net down, steering hard to get around the net.

When an opening is announced the seiners will often be seen heading to the area en-masse. A steady procession of boats will pass by, all headed in the same direction. Boats will arrive a day or two ahead of the opening to stake out their favorite point. You see them anchored in any small excuse for a cove, behind points and in the lee of islands, waiting for the appointed time. For several days the seiners will work the shore, a vessel every quarter mile, setting and pulling in the nets or shuttling to the tenders with their catch. When the area is closed the seiners may have a day or two off before the next opening. They head for the nearest port where the crew can rest. Towns like Tenakee or Warm Springs that boast some amenity like hot baths will quickly see their docks fill with seiners rafted three deep.

Operating alongshore these boats are usually easily avoided by simply cruising well outside. Be alert anytime you see a seiner in a channel, keep a watch for the power skiff working the net. You can look for the net trailing out from the main vessel. When not set the net will be piled on the back deck. If the power skiff has been lifted out of the water onto the back deck, or is under tow you can be reasonably certain there is no net in the water.

Usually a smaller fishing boat, 30-40 in length, gillnetters are easily identified by the large net drum on the back deck. There will also be a large roller on the taffrail to allow deployment and recovery of the net. Gillnetters deploy a long drift net with net openings sized to snare fish around the body and gills. These nets can be highly effective and are tightly regulated. This fishing method is also quite selective, with a low incidence of by-catch.

In SE Alaska the net is usually 200-300 fathoms (1200-1800 feet) long depending on the species targeted and the local regulations. It will be set to drift in a straight wall, usually perpendicular to a shoreline.

The net drum of a gillnetter on the back deck

The net drum is usually on a rail or can be re-positioned using hydraulics. When deploying the net it is positioned near the stern to allow it to roll out without blowing around or tangling other gear on deck. When pulling the net in the drum is positioned forward to provide a large working area. This allows the deckhand to remove fish and inspect the net.

Gillnetters typically operate with a crew of two, a boat handler and a deckhand working the net. This is often a husband and wife team, or the boat owner and a hired hand. The lightweight nets take constant maintenance to repair damage. You will often meet up with gillnetters with piles of net on the dock as they practice the age old art of mending a net.

Several nets are required with different sized openings to accommodate different species of fish. Offloading a net and loading a new net can take several hours and will be done multiple times through the season.

When gillnetters are operating in the area give them a wide berth. Unlike seiners there is no guessing where the net is in relation to the boat, it will be floating free of the boat during the set. You can look for large floats, usually an orange ball at either end, with a line of small floats marking the net. These can be difficult to see in rough water or until you are too close. When multiple boats are operating together the maze of nets set can be confusing, just go wide and well clear.

The troller is one of the more common types of fishing vessel. Using essentially the same technique as sports fisherman, the troller trails a set of long cables with hooked and baited leaders attached at regular intervals. They move slowly along, alternately pulling in or letting out these cables.

A typical troller, a smaller boat with stabilizers and a covered rear working deck.

Trollers are often one man operations, a single fisherman working the boat from the rear deck. A small helm station with a secondary wheel and throttle will be located on the rear deck next to the winches that control the lines.

The working stern area of a troller

As these boats use hooks rather than the highly efficient nets, trollers are less subject to the openings and closings that rule the lives of other types of fishing vessels. You will see them roaming the channels wherever the fish are. Observing the trollers in the area is a good hint in finding the fish yourselves. As they fish alone they are often chatty, you can listen to the conversations between the boats on your own radio. If the fish are there they tend to be busy and quiet, if the fishing is slow they will often complain and compare notes on the air.

Trollers will fish the same points and ledges preferred by sports fisherman and thus are often encountered while fishing. Avoid crossing behind a troller and his trailing lines. Particularly if you are fishing the same waters and trailing lines of your own. The troller’s lines can trail a hundred yards or more from his stern. Because trollers trail such long lines and work alone, they will typically stay farther from shore in deeper water. It is often possible to share the same point or section of coast by working closer to shore.

Easily identified by the lack of fishing gear on the back deck these boats feature stacks of the large plastic fish totes instead. Sometimes these are purpose built vessels, good sized steel or aluminum boats with a big working deck and a crane for lifting the totes to and from the fishing boats. Sometimes the tenders are smaller converted fishing boats, making a living in buying and transporting fish instead of catching them. You will find them anchored in protected waters near the fishing areas, often a fishing boat alongside unloading their catch.

You will hear frequently hear the tenders on the radio. They will call their arrival at the fishing areas, often quoting prices offered for the various types of fish. The conversations with the fishing fleet often reveal what is being caught in the area.

Typically smaller boats that are capable of operating in shallow water. A crabber is identified by their deck piled with crab traps and with a winch station along the side used to recover and deploy the traps.

Areas where the crabbers are active are apparent by the large number of floats found in protected coves and channels. Look out for floats anytime you are near a stream delta or tidal flats. These are the same places where you will be trying to anchor. The pots do get troublesome at times, be prepared to anchor a little more deeply than the pots. We find that most pots are in 40-60ft of water, thus anchoring in 80-100ft will place you further from shore and well away from the floats

In the summer the target is dungeness crab, the delectable crabs found in northwestern waters and the best of seafood bars. In the winter is the the deepwater king crab that the crabbers are after and the pots will be found in the large, deep channels across the region.

Crabbers can be highly jealous folks, guarding their pots and favorite locations closely. Given the value of the trap contents this is somewhat understandable, but we have witnessed behavior that goes beyond this. Be careful around crabbers, particularly when placing your own traps in the same area.

An electrical engineer living and working on Mauna Kea, Hawai'i. Webmaster for the NordicQuest.com website. Sometimes the first mate/deckhand/launch driver/anchor detail/cook/dishwasher and mechanic aboard the Nordic Quest.
View all posts by Andrew Cooper →
This entry was posted in Alaska, Cruising and tagged boat, fish, fishing, net, salmon. Bookmark the permalink.