I have a special place that I like to visit whenever cruising the east shoreline of Baranof and Chichagof Islands. It is a unique geologic formation and not one you would normally expect to find in Southeast Alaska unless you have some knowledge of the geological history of the region.

Of the three different geologic terranes, the Stikine, the Alexander and the Wrangellia, the Alexander terrane provides some very interesting and beautiful formations.  The rocks of the Alexander terrane originated from deep ocean trenches during the lower and middle Paleozoic Age that were pushed up, folded and faulted with the Wrangellia terrane during the early Cretaceous Period.  As a result, there are interesting outcroppings of limestone and marble over a wide area stretching from the Juneau Icefields and Auke Bay to Eastern Admiralty Island, Kupreanof Island down through Prince of Wales Island to Gravina Island near Ketchikan.  The Marble Grotto is one of these beautiful exposed outcroppings lying at sea level and formed by the action of both salt and fresh water. 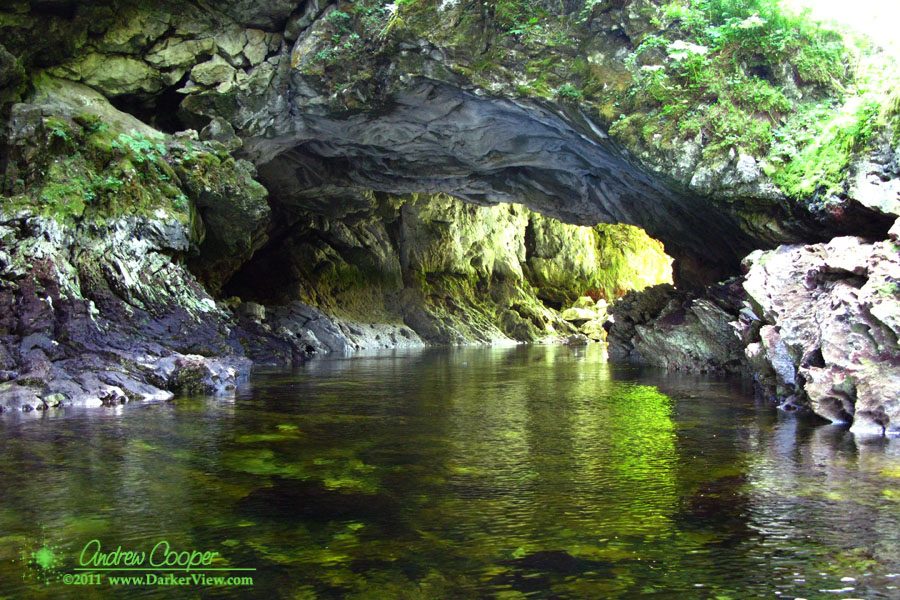 Several precautions should be taken when exploring this little tidewater cavern.  First, The bay is partially exposed to wind conditions in Chatham Strait and is not a desireable overnight anchorage.  I usually schedule a quick daytime stop and anchor pretty much in the center maybe favoring the northerly shore towards the second creek.  Timing to view the Marble Grotto is also critical.  An incoming tide after reaching midtide is fine.  If the tide is too low, the creek is not navigable with your shore dingy.  Using oars or paddles inside the cavern is best.  Also, the Grotto is a beautiful place to see, but like any limestone cavern, not to be touched.  So please do not put people ashore, deface or damage any of the formations.

Alaska resident at the time of statehood; retired professional civil engineer and for 35 years owner of an engineering company; firmer owner and skipper of the Nordic Quest; author, avid fisherman and world traveler. Lives with his wife and their water-loving standard schnauzer in Portland, Oregon.
View all posts by Fred Cooper →
This entry was posted in Alaska, Travel Hints and tagged Chichagof Island, Marble Grotto, travel. Bookmark the permalink.