Off the Wall Silvers 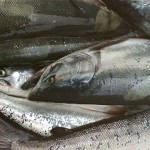 A cooler full of salmon, photo by Darcy Lynn

Years ago I used to fish every summer out of Clover Pass north of Ketchikan for silvers. My buddies and I would rent skiffs from the Knudson Cove Marina (at the time owned by Dick Miller one of my high school buddies) and on calm days we would scoot across to Camano Point. But when the southerly winds were blowing we had to troll around Point Higgins or from Pup Island up to Tatoosh Rocks. These have always been popular spots and on weekends there can be 30-50 boats fishing this area of Clover Pass. One year I decided to take a skiff out by myself one more time before calling it quits for the season. Rigged with a diver and full herring, I trolled north along the west side of Betton Island and off the second point got a strike from a nice 12 pound silver. After netting the fish I decided to do a quick turn and come through the same spot again. I had another strike and another nice silver in the boat. Will it work again? I brought the skiff around and trolled through the same spot a third time and took another silver. In all, I made six passes and took my limit of six silvers and was back at the dock cleaning my catch within an hour. I’ve never forgotten that incredible morning.

Last year, I had been fishing halibut near Kake and heard that there was a great silver run in the Ketchikan area. I was scheduled to be down there within the week and was curious whether my luck would repeat itself. My oldest son Andrew was with me and I showed him how we should fish it. We wanted to be just outside an underwater wall with the depth finder showing 135-140 feet. He put us in the right place and in minutes we had a double hit and landed two 15 pound silvers. Andrew circled around and came through the same location and we hit two more. We kept working the same spot and landed five more over the next hour. I definitely had a sweet spot and did it produce!