Sea otters are loved by out-of-state boaters and other tourists because they are cute and curious, furry little things and a rare sight. Guests on my boat first spot something floating and then get excited watching them float on their backs, preening their fur or simply in the act of eating whatever they grabbed off the bottom.

Re-introduced to SE Alaska in the 1960s, the sea otter seemed to be a welcome return to the ecosystem and their population remained fairly low for many years. Their birthrate is typically one pup per season and they live an average of 10-12 years. The sea otter is one of the smaller marine mammals with an adult male being five feet in length and weighing 60 to 70 pounds. The females are smaller. 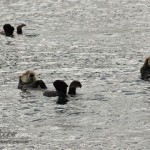 The population throughout SE Alaska is now estimated at about 25,000 and their range has been mainly along the outer coast and some interior areas like the west end of Icy Strait and Glacier Bay. Quite a bit of study has been conducted on the Glacier Bay population of sea otter and their impact on the bay’s ecosystem since the number of sea otter has grown from five animals in 1995 to over 8,000 in 2012. Park Rangers believe the peak in population still hasn’t been reached. Brendan Kelly, a marine mammal scientist at the University of Alaska Fairbanks, has projected a population increase of twenty percent per year.

As cute as these little marine mammals are, their current growth in numbers and impact on what they eat are generating considerable concern amongst both the general public and commercial fishing industry. Internet forums and blogs are full of comments about their impact on Dungeness crab, King crab and sea urchin populations. Sea otter have an insatiable appetite for abalone and sea urchins but they also eat crab and sea cucumbers. Because they lack body fat like seals, sea lions or Orca, they need to eat at least one quarter of their body weight. As a result, an adult sea otter foraging in an area that is good Dungeness crab habitat, can kill and consume 15-20 crab per day.

Tom Shirley, a University of Alaska Fairbanks biologist who has studied the interaction between the crabs and sea otters of Glacier Bay, says that sea otters can wreak havoc on crab stocks. This year when I decided to make another trip into Glacier Bay, I asked the Park Rangers about crabbing. The answer was to not waste my time. The crabs have all but been eliminated from Bartlett Cove and other previously productive locations such as Bear Track Cove.

The fate of other productive crabbing locations in SE Alaska is a big concern to myself and many Alaskans where crabbing is their livelihood or part of their recreational enjoyment. The history of our planet has shown that when a species over exploits its food source, it migrates. Will the sea otter move out of Glacier Bay and into Port Frederick, Lynn Canal, Tenakee Inlet and other bays along Chatham Strait? What about the commercial oyster farming areas around Petersburg? This summer I set some pots in Port Frederick and saw several otters in the area. There have been reports of seeing them all the way up Lynn Canal in Berners Bay.

Alaska resident at the time of statehood and returns annually; professional civil engineer and for 35 years owner of an engineering company; skipper of the Nordic Quest; author, avid fisherman and world traveler. Lives with his wife and their water-loving standard schnauzer in Portland, Oregon.
View all posts by Fred Cooper →
This entry was posted in Alaskan History, Fishing, Wildlife and tagged Dungeness crab, Glacier Bay National Park, Sea Otter. Bookmark the permalink.

One Response to Sea Otter in SE Alaska–Good or Bad Reintroduction?