Zarembo Island and its Anchorages

Often time northbound cruising vessels choose not to navigate Wrangell Narrows into Petersburg except during daylight hours. This is a wise choice as there are 62 channel markers and the navigation lights at night can look like a Christmas tree covered with red and green lights. So boaters usually start to look for a suitable anchorage within easy striking distance of the south entrance. While the public docks in Wrangell are an obvious choice, there are several other choices a bit closer for a solitary anchorage. These are the twin bays of Deep Bay and Roosevelt Harbor on the east side of Zarembo Island and St. John Harbor on the northwest side on Sumner Strait opposite Wrangell Narrows.

Roosevelt Harbor is a very calm and secure anchorage in nearly all weather and there is ample swinging room for at least three vessels. I have used this location several times after trolling for King salmon along Woronkofski and Vank Islands or near Babbler Point in the Eastern Passage. Holding in Roosevelt Harbor is only fair and I advise making sure your anchor is well set. There is a Forest Service dock at the end which I do not recommend. It is a working dock with quite a bit of traffic on weekdays as it connects to an extensive network of island logging roads. Part of the dock is in fairly shallow water and you could also find yourself grounded on a low tide.

I have not tried to anchor in Deep Bay but it is often used by boaters.

For sunset lovers, I highly recommend St. John Harbor. It is a pretty little bay and I like to anchor just off the southeasterly tip of Southerly Island with a view out Sumner Strait to the west. Several years ago, we were extremely fortunate to witness the northern lights from this location. One caution, check the weather forecast as exposure can result in St. Johns being an uncomfortable anchorage. 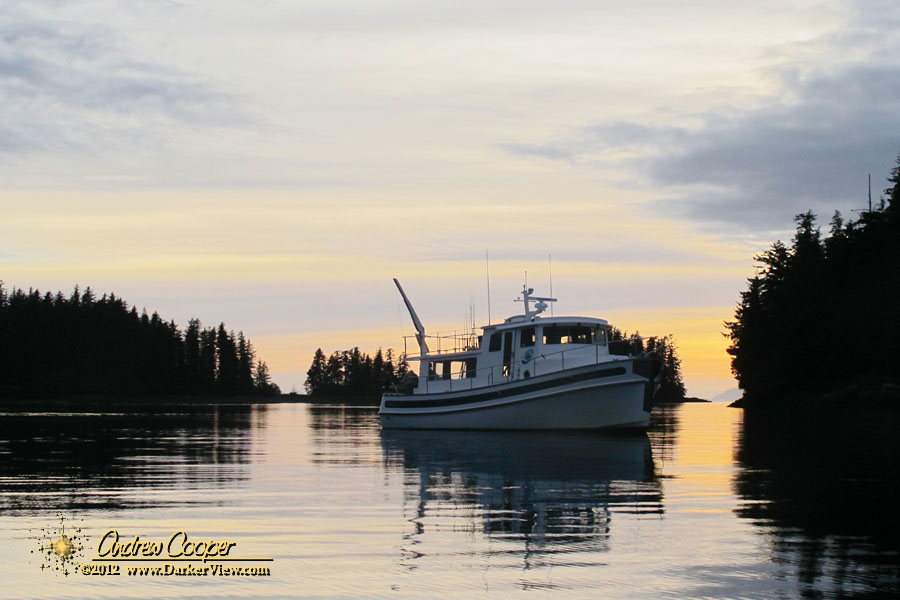 The Northerly and Southerly Islands in St. Johns were two of the some 300 islands used for fox farming in the 1920’s. Almost no evidence of facilities remains after 85 years.

Zarembo Island, in addition to its Tongass NF logging, has several items of historical note. There was an early fort at Nesbitt Point facing Clarence Strait and a mineral spring once provided bottled water called Zarembo Mineral Water which was sold in the Seattle area and won a gold medal at the 1904 Lewis & Clark Centennial. The Dr. Pepper Company even sought to develop it as a source for its product. Then again, geologic surveys have shown a presence of radioactive materials along the southerly and westerly shorelines. Hmm.

Alaska resident at the time of statehood and returns annually; professional civil engineer and for 35 years owner of an engineering company; skipper of the Nordic Quest; author, avid fisherman and world traveler. Lives with his wife and their water-loving standard schnauzer in Portland, Oregon.
View all posts by Fred Cooper →
This entry was posted in Alaska, Anchorages, Cruising, Harbor Notes and tagged anchorage, Deep Bay, Roosevelt Harbor, St. John Harbor, Zarembo Island. Bookmark the permalink.