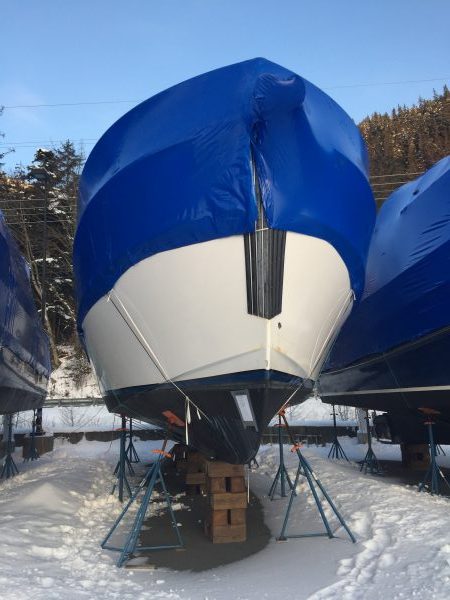 On the dry, wrapped and heated, the Nordic Quest is ready for anything that the winter months in Juneau can send her way. In med-September we hauled out the Nordic Quest at the new Auke Bay facility. We performed end of the season maintenance and began the lengthy process of winterizing her. By mid December the temperatures plummeted and the snow and ice started with a vengeance.  But she was ready. The load of crusty snow caused a bit of a problem with the temporary frame and had to be beefed up, but she is fine. Had a problem with the moisture affecting the shore power connection but luckily we caught that issue quickly as the boat is checked once a week.

We will be ready for the 2017 summer charter season and are very excited about some new arrangements. First off, the Nordic Quest will charter out of Auke Bay rather than Aurora Harbor on Gastineau Channel. This will reduce the cruising time nearly four hours when headed for Icy Strait or other points to the west of Juneau.

A second option we hope to offer to serious fishermen is picking up processed fish that is flown back to Juneau and holding it frozen until the end of a charter for non-guided, halibut fishing. This is about the only option due to strict enforcement of Intl. Halibut Commission requirements and risk of hefty fines. Fully processed halibut catch simply cannot remain on board.

We’ll have more information on our new chartering arrangements up on this site in a few weeks. So check back frequently.

Alaska resident at the time of statehood and returns annually; professional civil engineer and for 35 years owner of an engineering company; skipper of the Nordic Quest; author, avid fisherman and world traveler. Lives with his wife and their water-loving standard schnauzer in Portland, Oregon.
View all posts by Fred Cooper →
This entry was posted in Alaska, Chartering, Cruising, Fishing. Bookmark the permalink.